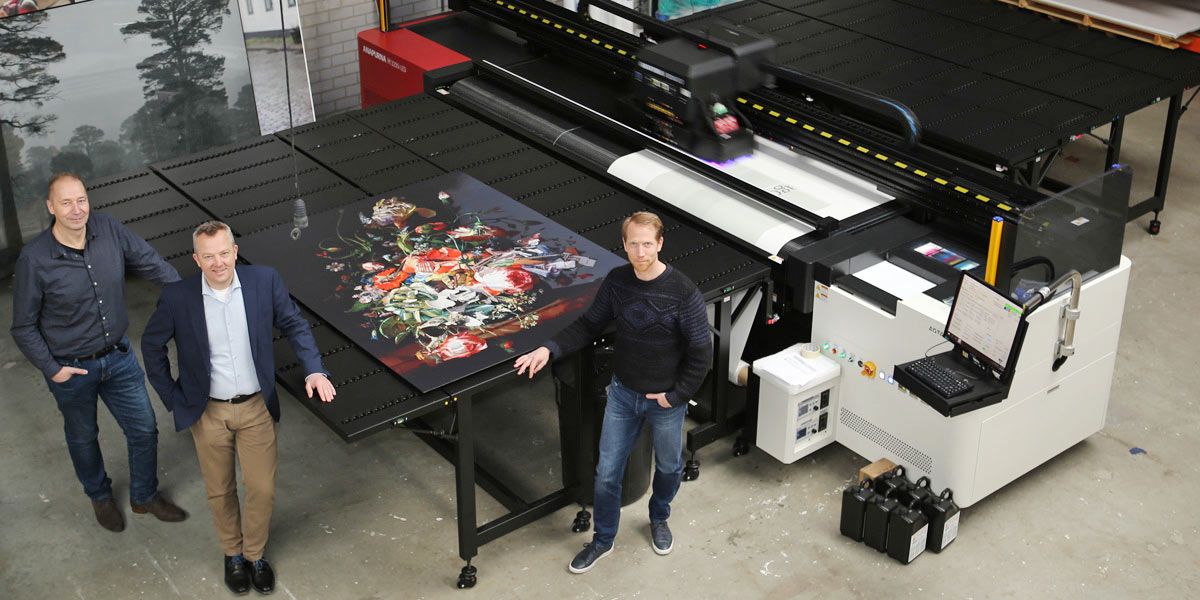 “We really print on anything”

Efficient production is key at Unfold in Haarlem (the Netherlands). In addition, the sign & display printing company wants to be tremendously flexible in answering specific customer requests. Their new Anapurna H3200i LED hybrid wide-format printer from Agfa is a perfect fit.

Unfold is originally an event organization. “Advertising is also part of that,” says owner René Spanger, who himself used to design the posters and flyers that were then printed elsewhere. Third parties soon appealed to his design talents. “Before I knew it, I was a print merchant.” Spanger also got into car lettering and wrapping and purchased a cutter. “From that moment on it got a bit out of hand,” says the young entrepreneur laughing. “At one point I had so much work that an own printer seemed useful to me.”

Today Spanger has five Mimaki printers; four equipped with eco-solvent inks and a 3.2-meter UV printer. Agfa agent Igepa is their supplier, also when it comes to print media. “In collaboration with Agfa, we also installed the very first Anapurna here,” says André Geuke, account manager at Igepa. That Anapurna M1600 is a UV printer with white ink and has been running at Unfold for seven years. “I deliberately chose a hybrid printer because of its flexibility,” says Spanger. “It’s an excellent machine with perfect print quality. But we are getting more work all the time. More people know where to find us; not only intermediaries, but also sign makers who outsource work to us. We just needed extra capacity.”

That extra capacity arrived in January 2020 with the purchase of the Anapurna H3200i LED. “What takes two days to print on the Anapurna M1600, can be done in one morning on the Anapurna H3200i LED. It is also more efficient. We can now fit boards of two by three meters on the machine, which gives much better nesting possibilities. Now we can limit our waste to a mere 8 percent.” Smart and efficient production is a common thread at Unfold. Embracing the Automation Engine, Esko’s workflow server, makes an important contribution to this. “It allows us to prepare many files for automated printing in a short time,” says Spanger. “We do a lot of work with relatively few staff.”

Not only the speed of the Anapurna H3200i LED is impressive, according to the entrepreneur. “Much has improved in recent years. In terms of software, but also on the machine itself, such as a web tension system on the roll. Inks, machine and media… all elements are matched perfectly. Thanks to the UV LED technology, we can print directly on polypropylene without any problems. But we also print artwork for photographers and they set the bar high.”

Printing five layers in one go

“The Agfa inks used with the UV LED printer are much more flexible than the old UV inks”, says Pedro Overmeer, Sales Manager Inkjet for Agfa in the Netherlands. “And consumption is lower because of the thin ink layer that is sufficient to get good coverage and the most beautiful colors.” The ink configuration is CMYKLcLm plus white. Spanger is enthusiastic about the possibility to divide the print head into five sections in the software. “Your speed may drop, but you can print five layers in one pass on transparent material, for example a block-out sticker with a double-sided image. Speaking of efficiency…”